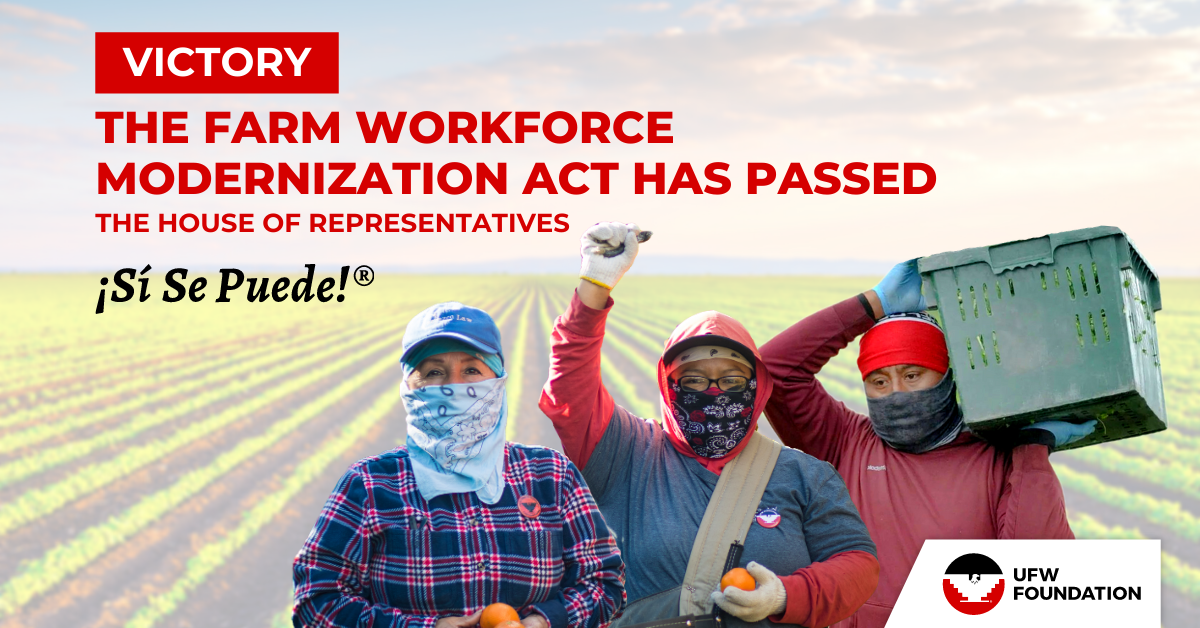 Farm workers and their advocates hailed passage Thursday by the U.S. House of Representatives of H.R. 1603, the bipartisan Farm Workforce Modernization Act of 2021, and H.R. 6, the Dream and Promise Act of 2021. The Farm Workforce Modernization Act became the first agricultural immigration bill approved by the House in more than 30 years in 2019, when it first passed the House. The 2021 agricultural immigration bill was approved on a 247 to 174 vote, including 30 Republicans. It is the result of months of intense negotiations between lawmakers from both parties, the United Farm Workers, UFW Foundation, Farmworker Justice and most of the nation’s major grower associations.

Also on Thursday, the White House issued a strongly worded statement backing the farm worker bill. Bill sponsors anticipate a bipartisan group of senators will introduce a Senate version of the measure and the UFW and UFW Foundation will call on senators to vote on it soon.

“House passage of these two bills in the first weeks of the 117th Congress demonstrates the commitment to emancipating Dreamers, TPS recipients and farm workers,” said UFW President Teresa Romero. “Farm workers’ hard work has earned them the right to a stable future in the United States. The Farm Workforce Modernization Act honors the professionalism of those who feed the entire nation and much of the world. It is the result of thoughtful compromise among bipartisan lawmakers, agricultural employers and farm workers.”

“Today’s votes are the direct result of decades of determination by farm workers and undocumented youth fighting for their right to keep their homes in the United States,” said UFW Foundation Executive Director Diana Tellefson Torres. “This is an opportunity for the nation to acknowledge that farm workers have always been essential, putting food on the tables of Americans even during a pandemic. This is the year to get it done.”