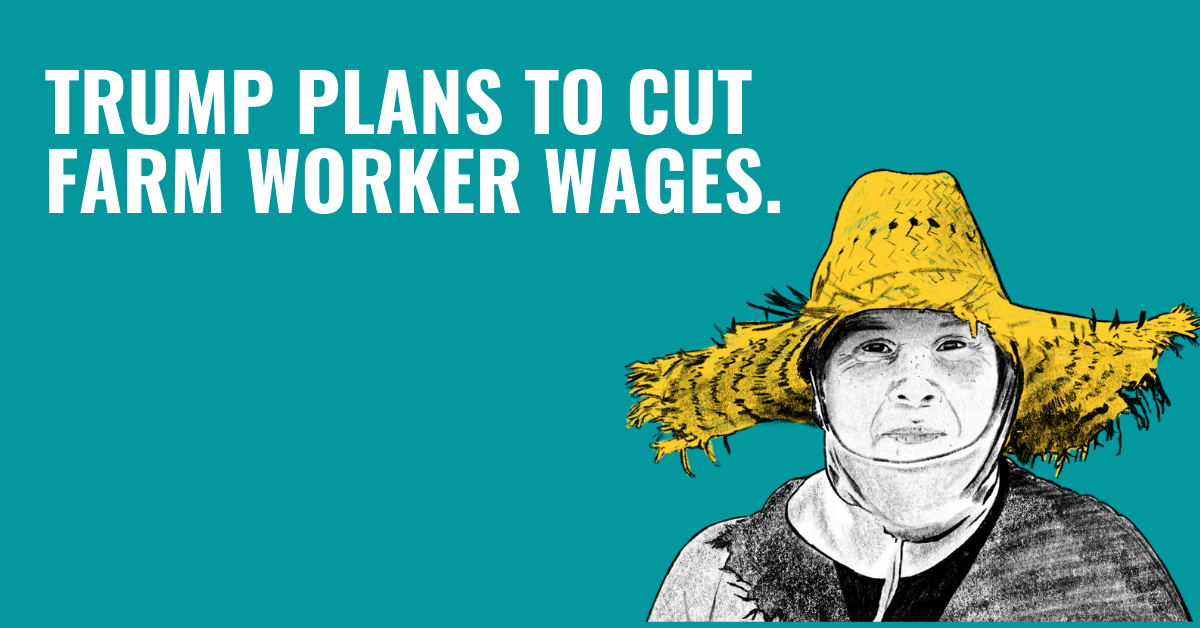 A lawsuit filed on Wednesday (Oct. 14) in Fresno federal court by the United Farm Workers and UFW Foundation alleges that a scant one-page notice recently issued by Donald Trump’s secretary of agriculture, Sonny Perdue, will “send ripple effects throughout the farm labor market, ultimately resulting in many U.S. farm workers being paid less as farms hire an increasing number of foreign laborers that can be paid lower wages than U.S. farm workers currently receive (emphasis added) (Page 2 of the complaint).”

The Trump administration decision “will cause many hundreds of thousands of farm workers already living on subsistence incomes to suffer significant wage cuts (emphasis added),” according to the complaint (Page 2).

Already low-paid farm workers must toil in the fields because they are officially classified as essential laborers in the midst of the COVID-19 pandemic. Yet the Sept. 30 Trump action, which will lead to reduced farm worker pay for both domestic and foreign agricultural workers, would cut field laborers’ wages by more than five percent in California, up to 27 percent in Oregon and 46 percent in Idaho, according to data in the lawsuit filed in U.S. District Court for the Eastern District of California. Farm workers—who must often live, commute and labor in overcrowded and unsanitary conditions—have been disproportionately impacted by the novel coronavirus and plagued by extreme heat and smoke from wildfires in California.

“How can Donald Trump justify slashing pay for all farm workers in the U.S., which means cutting wages by up to a quarter or a half in some states?” said United Farm Workers President Teresa Romero. She points out that Trump will personally benefit from this policy change by paying less to workers at his Virginia vineyards.

“The Trump administration has corrupted a fundamental principle of the H-2A agricultural guest worker program by making it impossible for federal officials to protect American worker pay from being depressed by the guest worker program,” according to Diana Tellefson Torres, executive director of the UFW Foundation. “This is happening in the middle of a pandemic that is already devastating rural farm worker communities.”

Following are excerpts directly taken from the lawsuit that can be accessed here, UFW v. Sonny Perdue, referencing page numbers in the pleadings.

The meager one-page announcement published by the U.S. Department of Agriculture in the Sept. 30, 2020 Federal Register “suspend[ed] the survey that serves…as the only source of information about hiring and wages paid by U.S. farms, the Farm Labor Survey (FLS), and ceas[ed] publication of the biannual Farm Labor Report. For over 100 years, USDA has consistently used the FLS to collect data about farm labor and wages.” (Page 1 of the lawsuit)

The U.S. Department of Labor (DOL) uses “FLS data…to set minimum wages for hundreds of thousands of U.S. and foreign workers employed on farms participating in the H-2A visa program. These DOL-set wages are calibrated—using FLS data—so that the admission of H-2A guest workers fulfills its statutorily mandated purpose of supplementing the domestic labor supply while protecting U.S. workers’ wages from being undercut (emphasis added).” (P. 2)

“The information collected by the FLS is critical to DOL’s administration of the H-2A agricultural guest worker program. FLS data are used to calculate the annual Adverse Effect Wage Rates (AEWRs), a minimum wage that must be paid by H-2A program employers. The AEWR is the primary wage rate under the H-2A program because it is used to calculate the wages of the vast majority of workers employed at H-2A program employers.  Eliminating the FLS would eradicate, or at least fundamentally alter, the AEWR. As a result, many employers would be allowed to pay farm workers the federal or state minimum wage, which is often substantially less than the AEWR (emphasis added).” (P. 3)

In short, “the AEWR is a minimum wage rate that must be offered and paid to both U.S. and foreign workers by employers seeking permission to hire H-2A workers (emphasis added).” (P. 19)

“Without the FLS, DOL is unable to publish the AEWR needed to administer the H-2A program. And without the AEWR, under DOL regulations H-2A employers will be permitted to pay the next highest wage between either the prevailing wage rate in the local area of employment or the federal or state minimum wage. As a result, H-2A workers and U.S. farm workers working for H-2A program employers will be paid materially less than they would have if USDA had conducted the FLS and issued the annual [Farm Labor Report] and DOL had published an AEWR based on that report (emphasis added).” (P. 19)

Without AEWR, “where H-2A employers are permitted to offer and pay the federal minimum wage, which is $7.25 per hour, U.S. and H-2A workers…will receive materially lower wages if USDA does not conduct the FLS and publish the annual [Farm Labor Report], and DOL does not establish an AEWR (emphasis added).” (P. 20)

—For example, “over 21,000 H-2A positions were certified in California through the third quarter of fiscal year 2020. Those H-2A workers in California and U.S. workers at their employers were required to be paid a minimum wage of $14.77 under the AEWR published by DOL…[W]out the AEWR, the minimum wage paid at most H-2A employers in 2021 would be California’s minimum wage of $14. Eliminating the AEWR in 2021 therefore would result in wages that are at least 77¢ lower per hour than they otherwise would have been, causing U.S. and H-2A workers to be paid $30.80 less per 40-hour workweek, totaling $1,601.60 in lost income over the course of the year. This pay cut of more than five percent would create severe hardship for farm workers, including UFW and UFW Foundation members (emphasis added).” (P. 20)

How Trump’s Sept. 30 notice will lower pay for both U.S. and foreign workers

“The H-2A agricultural guest worker program permits agricultural employers to hire foreign workers to perform agricultural work on a temporary basis when domestic labor markets cannot supply adequate workers at a particular time for a certain job. Employers are only authorized to hire foreign guest workers, however, if DOL certifies that the foreign workers’ temporary employment ‘will not adversely affect the wages and working conditions of workers in the United States similarly employed.’ And DOL has recognized, as a general matter, that the introduction of foreign guest workers makes wage stagnation or depression likely to occur (emphasis added).” (P. 11-12)

“To avoid adverse effects to U.S. workers’ wages, DOL regulations require that employers utilizing the H-2A program pay a wage that is the highest of the Adverse Effect Wage Rate (AEWR), the prevailing wage rate [in the region], an agreed-upon collective bargaining wage, or the federal or state minimum wage.” (P. 12)

“DOL’s regulations have required it to use the FLS to calculate the AEWR for the H-2A program since the program’s inception in 1986, and it had used FLS data for the H-2A’s predecessor program since 1953.” (Ps. 12-13)

“In 2010, DOL recognized that using data other than the FLS to calculate AEWRs ‘entails a significant risk that U.S. workers may in the future experience wage depression as a result of unchecked expansion of the demand for foreign workers.’ DOL explained that ‘[t]he FLS is the only annually available data source that actually uses information sourced directly from farmers,’ which ‘is a strong advantage of the FLS as the AEWR data source compared to all other alternatives (emphasis added).’” (P. 13)

“DOL similarly explained in a 2019 notice of proposed rulemaking that ‘[t]he FLS [remained] the Department’s preferred wage source for establishing the AEWR because it is the only comprehensive wage survey that collects data from farm and ranch employers.’” (P. 13)

Relief sought in the lawsuit

“In deciding to discontinue the FLS, USDA failed to explain its rationale for abruptly ending a century-old survey, and it failed to consider the numerous weighty interests that would be impacted by that decision. The decision is therefore arbitrary and capricious and an abuse of discretion. Moreover, USDA’s action is procedurally defective under the Administrative Procedure Act. For those reasons, USDA’s abrupt decision to discontinue the FLS and cease publication of the Farm Labor Report should be enjoined (emphasis added).” (P. 4)

“[The lawsuit alleges violation by USDA of the Administrative Procedure Act [APA] by failure ‘to consider important aspects of the decision,’ failure ‘to offer a reasoned explanation for its decision’ and violating the APA’s ‘requirement of notice and comment rulemaking.’” (Ps. 22-24)

It also seeks “a declaration that discontinuing the Farm Labor Survey and Farm Labor Report without undertaking notice-and-comment rulemaking is unlawful under the Administrative Procedure Act…” (P. 25)