Workers who put food on tables for millions get shots through collaboration with mushroom farm, laborers’ union

This article was originally published in the East Bay Times on Feb. 28, 2021; www.eastbaytimes.com 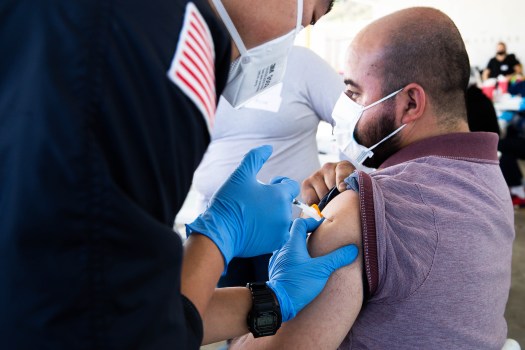 MORGAN HILL — The solution to protecting the farmworkers who feed millions of Americans seemed straightforward for a population that can’t work from home: Bring the COVID-19 vaccine to their places of employment.

But in the early months of the vaccination effort, the 3.4 million “essential workers” of the food and agricultural business were overlooked. Now that is changing, with efforts like the collaborative, public-private partnership that on Sunday launched an on-site vaccination center at Monterey Mushrooms, the country’s largest mushroom farm.

The two-day mobile clinic has a goal of vaccinating 1,000 employees of the region’s farms as Santa Clara County public health officials increase efforts to ensure all eligible citizens have access to vaccinations.

Dr. Sara Cody, Santa Clara County public health officer, said Sunday that officials want to reach the sectors that have been hardest hit by the COVID-19 pandemic. She added that the people who have been working diligently for the past year to bring Californians their food should have a chance to breathe more easily.

“Their families can begin to stop worrying so intensely about them,” she said.

Of the hundreds of employees who lined up Sunday at the Morgan Hill facility in Coyote Valley to get their shots, perhaps none were as relieved as Anastacio Cruz of Salinas.

Cruz said in Spanish that he was Monterey Mushrooms’ first employee to contract COVID-19 in April last year.  Cruz, 60, said his case was so severe he spent three months in a hospital and had to be intubated to help him breathe.

“My family tells me I was asleep for 50 days,” Cruz said after receiving his shot. “I had no clue what was going on but the doctors said I had a one percent chance of survival. Thank God I did wake up.“

Cruz, who has spent the past 13 years working at the mushroom farm, said he is on disability as he tries to get completely healthy. Health authorities say that even those who have already had the disease can reduce their chance of re-infection by getting the vaccine.

Santa Clara County and the mushroom farm teamed with the United Farm Workers and the UFW Foundation to hold clinics Sunday and this Wednesday in what some say could be a blueprint for other California counties to reach underrepresented communities.

Monterey Mushrooms owner Shah Kazemi said he wants to protect his 1,200 workers but also farmworkers across the country.

“The people who risk their lives every day are finally getting recognized,” he said. “That doesn’t happen in every county.”

About six weeks ago, the company began including COVID-19 literature, written in Spanish, with employees’ paychecks. The company’s medical director, Dr. Walter Newman, said the idea was to educate the farmworkers on the importance of getting vaccinated by showing risks to the Latinx community.

But he said the company’s workers had some comfort with getting vaccines because of the farm’s two-decade-old program to give employees annual flu shots on site.

According to research, the employees are at increased risk because they often work in close quarters and live in crowded housing.  A UC San Francisco study found that COVID-19 deaths among California Latinos were 36% higher than among the average state population — with a 59% increase among Latinos who were food and agriculture workers.

Farmworkers have been among the most difficult people to reach during the country’s mass vaccination campaign, experts say. More than three-quarters do not have health insurance. More than 10% have never seen a doctor, a United Farm Workers Foundation survey shows.

Researchers say other issues about getting vaccinated include citizenship concerns among the largely undocumented population, a language barrier in a mostly Spanish-speaking workforce, and computer illiteracy, which is needed to schedule online appointments.

“This is the tip of the iceberg,” he said. “We need to provide better healthcare for (agricultural) workers. People need to have medical coverage.”

The collaboration Sunday felt like a triumph for Dr. Cody, who has spent the past year trying to resolve one crisis after another. She said she felt good watching the farmworkers receive vaccinations.

“I wanted to see and feel the tremendous hope we have here today,” Dr. Cody said. “I just want to soak it up.”

Walterio Martinez, of Gilroy, expressed relief while standing in line to get his shot.

“We were hearing how a lot of people were dying without the vaccine,” he said in Spanish.  “We were at risk.”

Martinez, 61, said he knows fellow workers who have suffered because of coronavirus. He said he wonders if the workers could have been saved had they had access to the vaccine earlier.

Cesar Omar Lara of San Jose showed little emotion after getting injected. He calmly walked to a waiting area where Lara was told to sit for 15 minutes to make sure he didn’t have any side effects.

Lara said in Spanish that he was happy to get it over with.

“The people doing the hardest work were the hardest hit,” County Supervisor Cindy Chavez said. “The way we can honor them” is to “do these vaccinations.”