This article was originally published in Business Insider on March 3, 2021; businessinsider.com 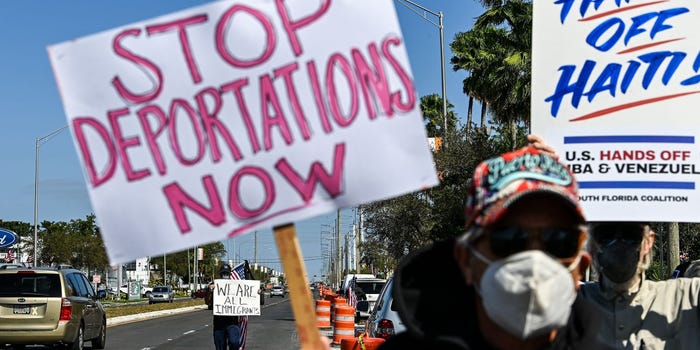 Demonstrators protest outside the US Citizenship and Immigration Service office in Miami, on February 20, 2021, demanding that the administration of US President Joe Biden cease deporting Haitian immigrants back to Haiti. CHANDAN KHANNA/AFP via Getty Images

Democrats now control the House and the presidency, and narrowly control the Senate, and activists want them to use their power, and with any means available, to protect millions of undocumented immigrants from the threat of deportation.

"This is our time," Greisa Martinez Rosas, executive director of United We Dream, said on a conference call Wednesday. Her group — a youth-led immigrant rights organization that claims 400,000 members — is calling on Congress to pass the Dream & Promise Act, legislation that would prohibit the federal government from deporting those who came to the United States as children, as well as anyone who has received Temporary Protected Status after having fled a natural or man-made disaster.

President Joe Biden has pledged not to deport members of either group, but unilateral executive action is always subject to legal challenges; a 100-day total moratorium on deportations, for example, was recently overturned by a conservative judge responding to litigation from Texas' Republican attorney general.

"Our movement delivered a clear political mandate," Martinez Rosas, an immigrant from Mexico who has lived in the US since she was a young child, said on the call. Democrats have "a moral and political obligation to see it through," she argued, adding that the legislation should be passed without any compromises that see more funding go toward border enforcement.

Introduced in 2019 by Rep. Lucille Roybal-Allard, a California Democrat, the bill passed the House, with the support of all Democrats and seven Republicans, but went nowhere in the GOP-controlled Senate. Activists expect it to be reintroduced shortly in lieu of the comprehensive reform package proposed by President Biden, which would provide a path to citizenship for over 11 million undocumented immigrants.

"We are saying clearly to Democrats that they must use every available pathway, including legalization in the upcoming COVID jobs package, and any other effort to ensure that we have protections for undocumented people," Martinez Rosas said.

Under the Deferred Action for Child Arrivals program, many immigrants who came to the US as children are eligible to obtain work permits and protection from being forcibly removed from the country. But DACA requires its recipients to renew that protection every two years; the lack of permanency exacerbated by shifts in the political landscape.

Joella Roberts, a DACA recipient who came to the US as a child from Trinidad and Tobago, said it's a mark of progress that that legalization is on Congress' agenda, reflecting "the growing power of our movement." And she praised lawmakers for ensuring that misdemeanor convictions — and possession of marijuana — would not make one ineligible. But, she said, "I would be remiss if I did not mention our disappointment with the criminal bars that are still in place."

Activists also expect Democrats to introduce another measure that could provide a pathway to citizenship for around one million undocumented farmworkers and their families. Votes on both pieces of legislation are expected before the House's March 22 recess.

"It is long overdue for Congress to recognize the integral role that immigrants play in our communities and in the nation for food security," Andrea Delgado, government affairs director at the United Farm Workers Foundation, said Wednesday. "We look forward to the imminent introduction of these bills and to sending them over to the Senate, where we will continue to build power and demand change."