This article was originally published in the Associated Press on March 10, 2021; apnews.com 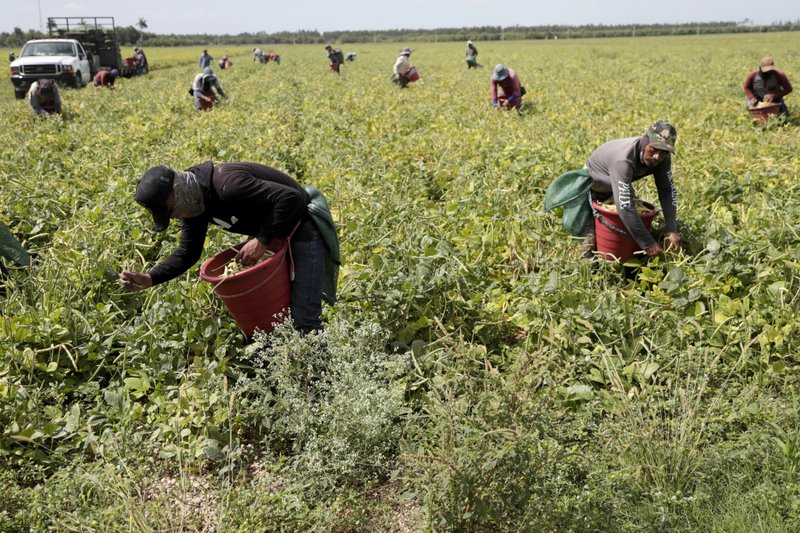 FILE - In this May 12, 2020, file photo, farmworkers harvest beans during the coronavirus outbreak in Homestead, Fla. Many U.S. health centers that serve agricultural workers across the nation are receiving COVID-19 vaccine directly from the federal government in a program created by the Biden administration. But in some states, farmworkers are not yet in the priority groups authorized to receive the shots. (AP Photo/Lynne Sladky, File)

With Georgia’s sweet onion harvest approaching and COVID-19 vaccine arriving in increasing quantities from the federal government, migrant health centers around the state want to start vaccinating farmworkers. But there’s a catch.In Georgia and many other places around the U.S., such efforts are blocked by state policies that give priority for shots to other groups.

“Our hands are tied,” said East Georgia Healthcare Center CEO Jennie Wren Denmark, whose agency runs 13 clinics, including one in Vidalia, home of the celebrated Vidalia onion. Her clinics’ vaccine will instead go to patients on the state eligibility list, which was expanded this week to teachers.

Public health authorities have said in their defense that drawing up the priority lists is a complex balancing act that requires them to take into account outbreak data, the risks to various categories of workers and vital industries, and the limited supply of vaccine.

Farmworkers and activists are upset.

“Waiting and waiting has some people angry and causes despair,” said Edgar Franks, a 41-year-old leader of the agricultural union Familias Unidas por la Justicia, or Families United for Justice, who works in the blueberry fields on weekends in the Mount Vernon, Washington, area. “We’re essential, but we are not really treated as essential.”

Leticia Cuevas, 35, who works pruning wine grapes near Prosser, Washington, said: “I hope that everything could return to normal and that we would all be treated equally. We all deserve dignity.”

Farmworkers run an elevated risk of getting infected. They often live in crowded bunkhouses and eat together in dining halls. Those who toil outdoors often travel to the fields together in vans or buses. Others work in bustling packing houses.

An estimated 9,000 agricultural workers in the U.S. have died of COVID-19, said Jason Lusk, professor of agricultural economics at Purdue University. Nearly a half-million have been infected, according to a Purdue estimate, with the highest numbers in Texas, California, Iowa, Wisconsin, Oklahoma, Tennessee, Missouri, Florida and Minnesota.

The concern extends well beyond those who labor in the fields and packing houses.

“Agricultural workers are important for the security of our food supply,” Lusk said, noting that supermarket prices went up last year when COVID-19 outbreaks shut down meatpacking plants. “Making sure we have the people available to plant and harvest will make sure our grocery stores aren’t empty or our food prices don’t rise.”

Cuevas, a member of the farmworker advocacy group UFW Foundation, agreed: “We are in the fields getting the work done to feed all the families.”

Last week, more than 60 health centers that serve agricultural workers in 21 states began receiving COVID-19 vaccine directly from the federal government in a program created by the Biden administration. But in most of those states, including Texas, New York, Georgia and Florida, farmworkers are not yet in the priority groups authorized to receive the shots.

And the federal vaccine came with a restriction: The health centers must follow state priorities.

In Washington state, workers are beginning to arrive to toil on hops farms and in cherry and apple orchards.

“Quite frankly, as they arrive, once they test negative, we should vaccinate them,” said Lori Kelley of Yakima Valley Farm Workers Clinic. “We want to vaccinate all of them.” But they won’t become eligible until March 22 unless they fall into Washington’s priority groups — 65 and older, or 50 and older and living in a multigenerational home.

Across the U.S., health care workers and older Americans have been put at the front of the line for vaccinations because they have borne the brunt of the disease. In recent weeks, the line has been opened to various groups such as teachers, who are considered vital to reopening schools and letting parents get back to work. Those decisions have been left up to the states.

“All of these decisions are incredibly difficult and unfortunately driven by limited supply,” said Michele Roberts, acting assistant health secretary in Washington state. She said the health department recognizes that agricultural work is “one of the highest risk occupations” and has put it in the next group for vaccinations.

In some California counties, vaccination drives are targeting farmworkers.

“I’m so happy. I’m feeling so good,” farmworker Monica Gonzales said at a March 3 mobile vaccination clinic held at Monterey Mushrooms in Morgan Hill, California. She said getting vaccinated will allow her to see her granddaughter.

Florida, which grows half the nation’s domestic tomatoes and 70% of its citrus fruit, hasn’t specified farmworkers in its vaccine priority groups. What’s more, Florida has a restrictive residency requirement for vaccination. People must show a state ID or documents such as a utility bill.

“The challenge for farmworkers is many don’t have these documents,” said Alexis Guild, director of health policy for Farmworker Justice, an advocacy group.

“It only makes sense. All these states benefit from economic contribution from farmworkers,” Partida said. “Why would you not make that change in your plans in order to safeguard that workforce?”